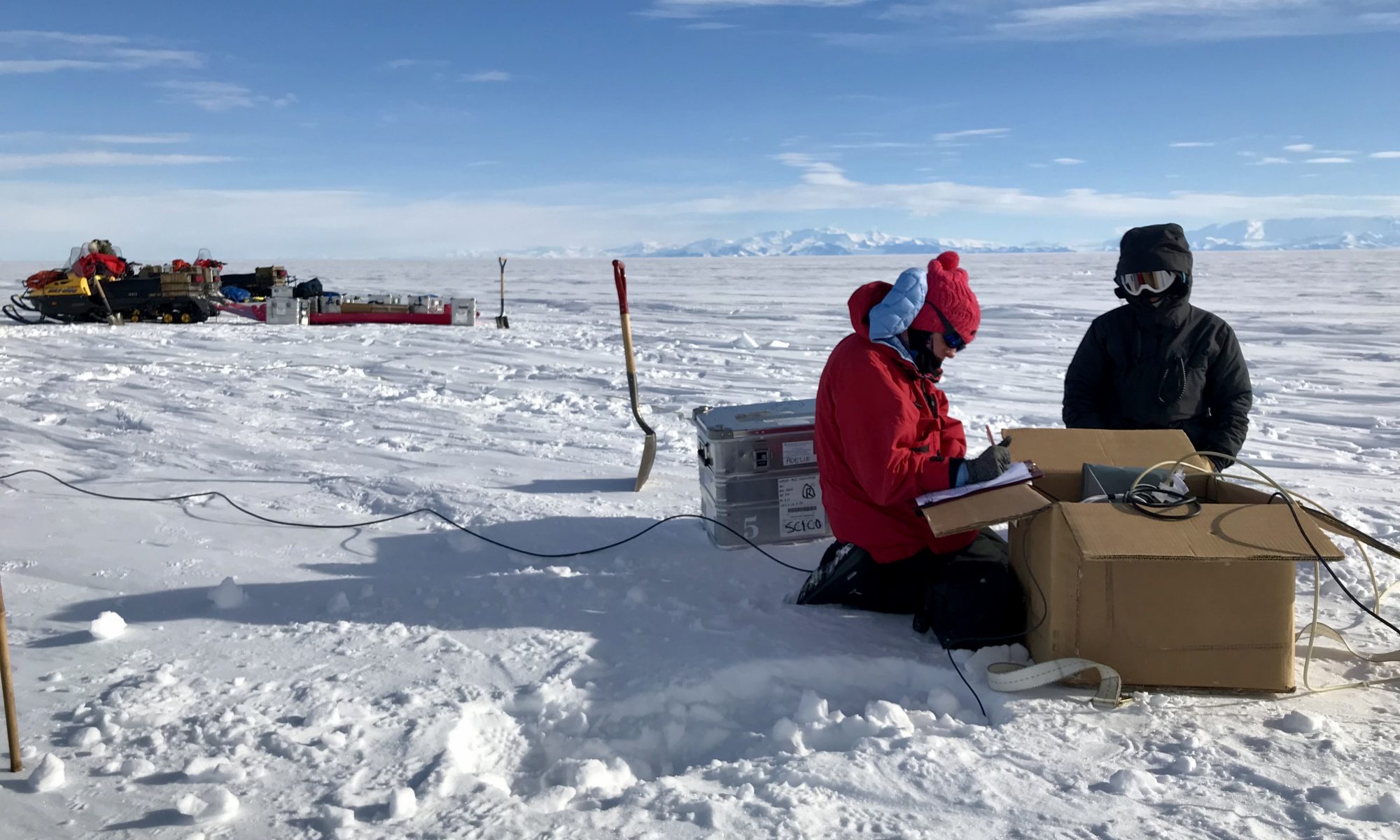 During November 2018 to January 2019 we carried out an extensive geophysical survey on the Whillans Ice Stream in West Antarctica.  Our survey is the first to use magnetotelluric (MT) imaging to map subglacial groundwater water beneath an ice stream. We collected a total of 44 passive MT stations, as well as several active-source electromagnetic (EM) stations using a large loop transmitter system. These data will be used to study the distribution of groundwater at the base of the ice stream at both the grounding line where the ice stream turns into the Ross Ice Shelf and at Subglacial Lake Whillans.  We also serviced a few long term GPS stations that have been recording data for several years and that have been used to track transient changes in ice velocity associated with basal water filling and draining in subglacial lakes. Our project is in collaboration with Matt Siegfried (Colorado School of Mines) and Helen Fricker (Scripps Institution of Oceanograpahy, UC San Diego). Both EM and MT methods and the rationale for their use are described in our feasibility study paper.

Our four person team consisted of Columbia graduate student Chloe Gustafson, Columbia Prof. Kerry Key, Colorado School of Mines Prof. Matt Siegfried and mountaineer Meghan Seifert.  We spent the first three weeks at Camp 20 while surveying the grounding zone. We then loaded up our camp gear, food, fuel and science cargo onto eight sleds that were towed by our four snow mobiles as we did a marathon drive to  Subglacial Lake Whillans. There we set up a new camp and carried out a 3D MT survey of the lake and surrounding groundwater system. Finally at the end of our field season, we packed up camp once again and took a two-day drive to meet up with the Subglacial Antarctic Lakes Scientific Access (SALSA) drilling project at Subglacial Lake Mercer.  After camping on our own for 6 weeks, the (comparatively) luxurious SALSA camp felt like the Ritz Carlton since we could take warm showers at last, had camp staff to  cook the meals, and we could sit at proper tables and chairs when eating.  Hands down this was some fun but seriously laborious and exhausting field work. Check out the photos and videos below showing scenes from our epic experience camping on the ice stream for six weeks.

Many thanks to Phoenix Geophysics for lending us four MTU-5C ultra-wideband magnetotelluric systems and to Phil Wannamaker for his electric field preamp systems.

This project was funded by National Science Foundation Award 1643917

We spent the first nine days at McMurdo Station taking various training courses, preparing our science, food cargo, and camp cargo.  Then we waited around for several days for our LC-130 flights out to the deep field. While waiting we enjoyed some of McMurdo’s recreational activities and hikes. We also did an overnight camp on the McMurdo Ice Shelf as part of our deep-field shakedown preparations.

These photos show the layout of our deep field camp. The general idea is that everything should be spaced out across a line perpendicular to the predominant wind direction, and placed far enough apart to reduce drifting. Individual cargo lines have the cargo along a line parallel to the wind (i.e. streamline). We flag the cargo lines and tent routes in case things get buried or there’s a white out and we need to navigate safely from point A to B.