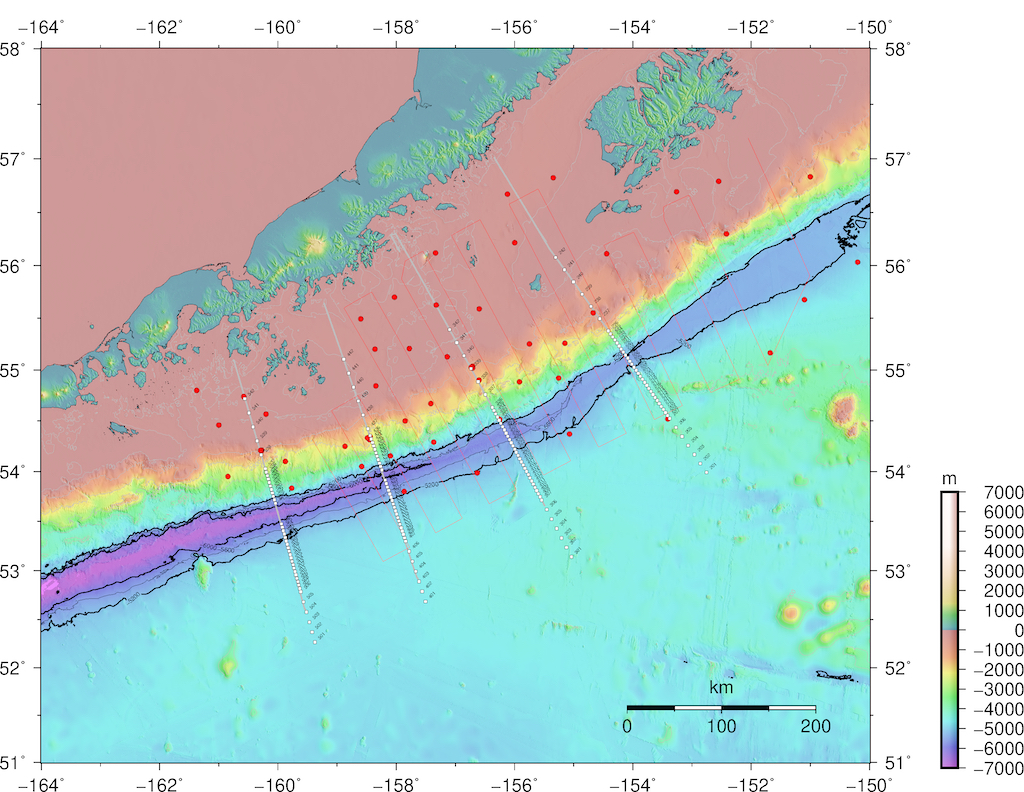 Click here to see our blog with stories and photos from the research cruise during May-June 2019.

This project uses new marine electromagnetic (EM) imaging technology to study the fluid content of the crust and mantle along the Semidi and Shumagin sections of the Aleutian-Alaska subduction zone (AASZ). These sections of the subduction system have markedly different seafloor fabric entering the trench and commensurately different seismicity. Data from a 2011 active seismic survey at this location show variations in sediment thickness and crustal fracturing along the incoming plate but are not able to fully constrain the amount and distribution of fluid. Passive and active EM data will be collected during a month-long cruise at 168 ocean-bottom stations along trench-crossing profiles. Controlled-source EM (CSEM) data will image the electrical conductivity of the sediments and crust, while passive magnetotelluric (MT) data will map deep crustal and upper mantle conductivity. Together these data will constrain the hydration state of the incoming plate at the trench outer-rise, the distribution of fluids along the plate-interface beneath the forearc, and the release of fluids into the overlying forearc crust, with the goal of understanding how the transport and release of fluids along the plate boundary may regulate earthquake behavior and plate slip.

The AASZ is ideal for studying megathrust earthquakes, seismic cycles and arc volcanism since it is characterized by changes in plate locking that occur over relatively short distances, with distinct slip behavior defining each segment. The Semidi Island segment last experienced a great earthquake in 1938 (Mw 8.2) and is nearly fully locked, allowing enough strain to accumulate for a repeat earthquake of similar magnitude, while the nearby Shumagin segment exhibits a near absence of seismicity and is not thought to be accumulating strain. This project will use newly proven marine EM imaging technology to map the electrical conductivity structure and hence fluid content of the crust and mantle along these two segments of the AASZ. The new EM data will be interpreted in conjunction with the existing seismic survey results to: (1) test the hypothesis that along strike variations in seismicity and plate locking are related to the fluid content of the incoming oceanic plate, which in turn is related to the pre-existing fabric in the plate and the orientation of this fabric with respect to the trench; (2) image and quantify fluids released from sediment dehydration along the surface of the downgoing plate; (3) image and quantify zones of overpressurized fluids and hydrofacturing of the overriding plate related to fluid release from the slab; (4) compare the conductivity structure at the AASZ with similar profiles at the Middle America Trench, an end-member system where seafloor faults are aligned parallel to the trench, potentially maximizing fluid-flux into the system, and with profiles recently collected on the Hikurangi Margin offshore New Zealand.