EM Lab graduate student Dan Blatter led a new paper on joint Bayesian inversion for marine magnetotelluric (MT) and controlled-source EM (CSEM) data to image submarine groundwater aquifers. The MT data is preferentially sensitive to the conductive parts of the model while the CSEM data is more sensitive of the more resistive low salinity aquifer. Joint inversion of the data yields the best resolution, as demonstrated with Bayesian uncertainty analysis. BBC News World Service (2019) “Could there be drinking water under the seas?” This has been a year for subduction zone electromagnetic surveys. In February we completed a large-scale survey of the Hikurangi Trench off the North Island of New Zealand, and now we just completed a complementary large-scale survey of the Alaskan subduction zone. Principal investigators Kerry Key and Samer Naif led  a large team that included Lamont graduate students Christine Chesley and Tanner Acquisto and postdoc Julen Alvarez-Aramberri  onboard the R/V Sikuliaq offshore of the Alaska Peninsula.  The electromagnetic and magnetotelluric imaging data collected using 159 seafloor stations and a deep-towed transmitter will be used to study fluids along the subduction zone plate boundary and how they impact plate tectonics and seismicity.

Click here to see photos and read the cruise blog.

We’re on our way back to Seward with an ETA of 0800 tomorrow.  The ship is taking the scenic route via Shelikof Strait, which runs between Kodiak Island to the east and mainland Alaska to the west. Yesterday the crew had training drills planned so the ship pulled into the calm waters of Katmai Bay, and once again we got super lucky with the clouds parting as we neared the shore, giving us sunny skies and spectacular views of Katmai National Park.  We saw several whales, lots of sea otters and a few volcanoes.  After a month of working 24/7 on the ship for the EM survey, it was nice to have a day off while we steam back to port. In addition to enjoying the scenery, in the afternoon we had a round of 6 science talks in the ship’s lounge, including: analysis of melt inclusions from the western Aleutians (Janine Andrys), electromagnetic mapping of submarine groundwater off Hawaii (Eric Attias), EM exploration of the Middle America Trench (Samer Naif), EM mapping of seafloor gas hydrates  (Steve Constable), active seismic imaging of subduction zones (Tanner Acquisto) and aquifer systems extending far offshore on the US Atlantic margin  (me – Kerry).  I’m looking forward to another five science talks today, as its nice to get to learn more about what everyone is researching, including the students from other universities who’ve volunteered for our cruise, especially since we’ve spent a month together plugging in electrodes, cabling instruments, throwing grapnels, driving deep tow winches and going through lots of scotch  3M electrical tape, cable ties and all the things required to get new seafloor EM data at a subduction zone. Now we get to spend time learning about everyone’s research and ongoing projects.   Photos from Katmai bay below. We pulled up to station 220 around 9 PM and sent a few release commands to receiver Steelhead but heard no replies. The Sikuliaq has a deployable centerboard that extends several feet below the hull and so we’ve been using the transducer on the end of the centerboard since that’s a less noisy environment for a transducer than up on the hull where more water turbulence and air bubbles can muddle the incoming pings. For almost all of the receiver recoveries that has been working really well.  But alas, we couldn’t get any commands through to Steelhead, though we did sporadically get a reply when trying to range on it so we knew it was still alive (in the acoustical communication sense). Earlier in the cruise Jake noticed another receiver that was hard to communicate with, but which worked just fine when we switched to the ship’s hull mounted transducer (as opposed to the centerboard ducer). So we switched to the hull transducer and bam – it acknowledged its release command on the first try! About four hours later we landed it on deck.  So new numbers for the cruise:  159 deployments and 159 successful recoveries. Coupled with the 168 deployments and recoveries we did on the HT-RESIST survey earlier this year, that’s makes for 327 total deployments without a single loss of instrument this year. To be fair, we did have two receiver frames and some sensors destroyed when the ship ran them over during their recovery this cruise, but we still got the data loggers (and the data) back.

We did it! The last receiver has been recovered, giving us a total of 158 seafloor EM stations occupied in just about four weeks. Actually, we’re hoping this is the penultimate receiver recovery since we’re steaming back to station 220 on our first survey profile to see if we can persuade receiver Steelhead to release from its anchor. We had trouble communicating with Steelhead’s acoustic system and gave up on it back a few weeks ago, but now we’ve got some extra time on hand so we can drive around it to see if it can hear its release command better when the ship is at a certain azimuth; there’s a big seamount nearby that may be giving some reflections that muddle the acoustic signals heard by Steelhead and hopefully we will find just the right angle that allows it to hear its release command. Fingers crossed…

In the mean time, below are some photos from the last few days. 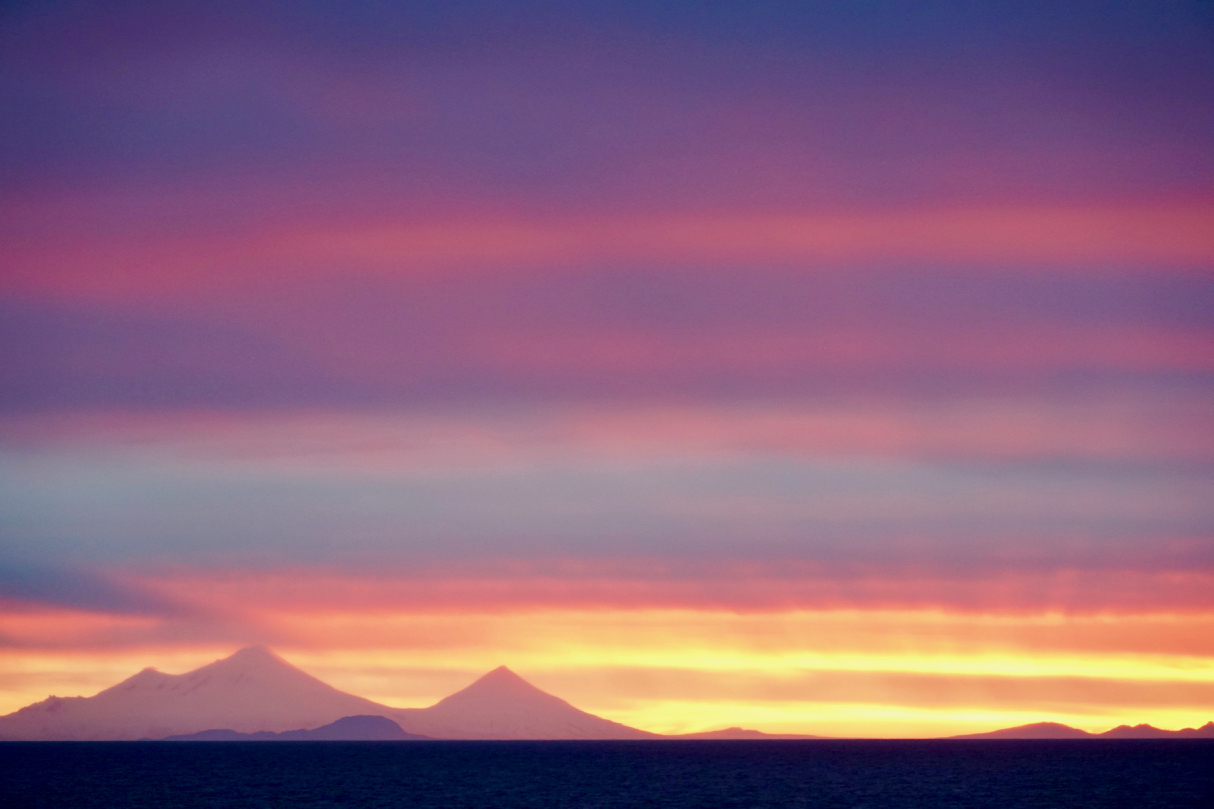 Yesterday was an amazing day at sea. In the morning we got to see a pod of Orca (YES ORCAS!!!!) swimming past the ship. Check out Steve Constable’s photo of the orcas here. We made our way to within about 10 miles of Unga Island in Shumagin islands group just as the clouds were clearing, giving us a scenic view of the Shumagin islands as well as the nearby Alaska Peninsula coast, including Pavlof volcano and Pavlof Sister. The clouds kept clearing throughout the afternoon as we deployed SUESI for surface electromagnetic transmitter towing across the shallow waters of the continental shelf (similar to surface tows we did in a paper published today about mapping offshore groundwater on the US Atlantic coast). As the evening set it, the skyline lit up as the sun set just to the right of Pavlof, blazing the sky into a spectrum of yellow to orange to purple colors.  Check out the photos below. Julen Alvarez-Aramberri, a Lamont postdoc from Basque Country, an autonomous region of Spain, has been crafting a detailed blog about our cruise and life at sea. Check it out here: https://ciencilari.wordpress.com/

We’re nearly done redeploying all 39 receivers and will be towing SUESI on the continental shelf later this afternoon. At the moment there several small islands in view, which is nice sight after spending the last few weeks mostly out of sight of land. Some photos from yesterday below.

We finished recovering all 39 receivers and now are just about to redeploy them. We’re splitting the fleet in half, with twenty receivers to be deployed on the abyssal plain to collect MT data and 19 to be deployed on the continental shelf at 80 – 100 m water depths, where we plan to surface-tow SUESI so we can get shallow water CSEM data sensitive to the upper crust and  MT data sensitive to the crust and the deeper mantle wedge. This will extend the forearc slope data so that in total we will have a 160 km profile of CSEM and MT data from the trench up onto the shelf (plus about 50 km of CSEM and MT data from two crossing profiles on the forearc slope). And with the abyssal plain data, the MT profile will be about 240 km long. Although SUESI has a high pressure leak somewhere, we tested that it can still hold a vacuum and so we feel safe lowering it to 10 m water depth on the shelf (i.e., only 1 additional atmosphere of pressure).  The weather prediction is looking great for the next week so we’re all hoping we can successfully finish this last leg of the project.

In the mean time, here’s a funny EMAGE movie trailer made by Bern: