We completed OBEM recoveries for the northern transect early this morning. Although the SUESI operations proceeded without a hitch, this time around we hit a snag with logger setups. Three OBEM receivers were programmed to wake up and begin recording on the wrong date (Dec 2019 vs Dec 2018), and so were recovered with no data on them. Unfortunately, these were deployed consecutively and were centered on the trench axis. I was quite irritated by this all day yesterday, but such is life. Besides that, the remainder of the sites were recovered with plentiful high quality data, including the sites where we performed the additional crossline tows. Overall, very proud of our science team’s performance. It also helps that Poseiden must have sensed my frustration, because he gifted us with a wonderful display of dolphin magic that same afternoon, and I actually managed to snap a few pics of some bow surfing action. 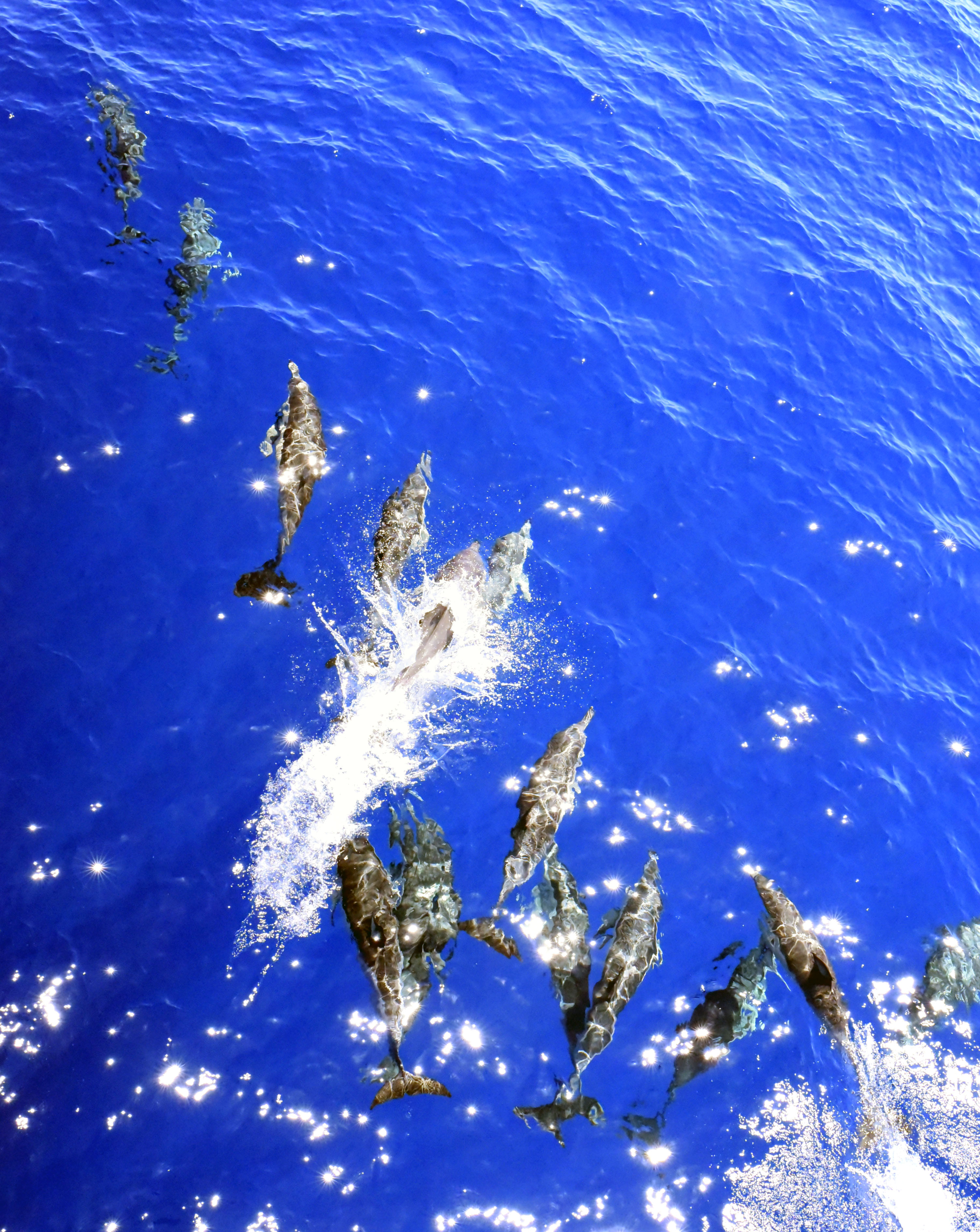 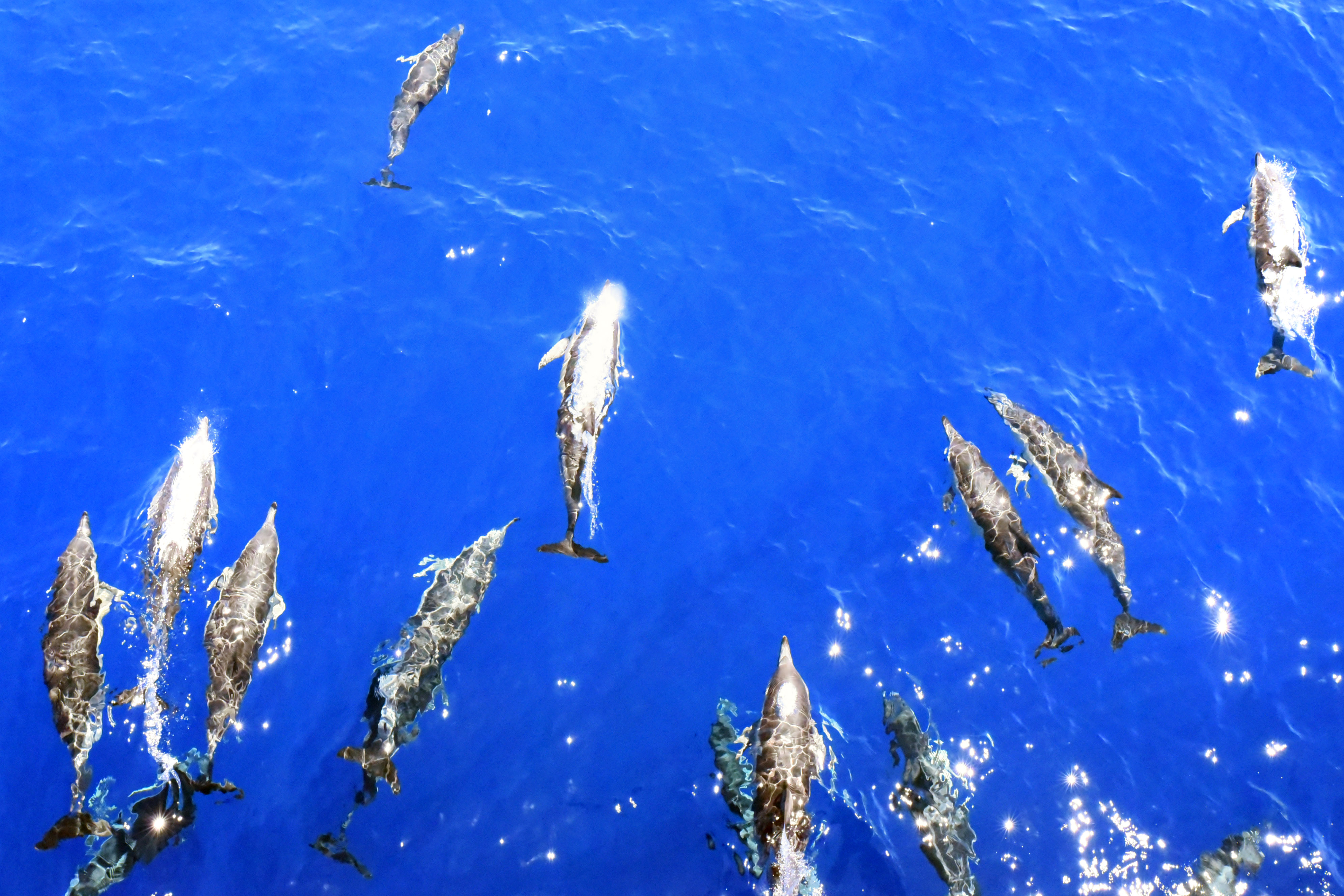 Currently deploying more OBEM receivers and getting ready to start ops for our central crossing transect, the final SUESI tow of our voyage! 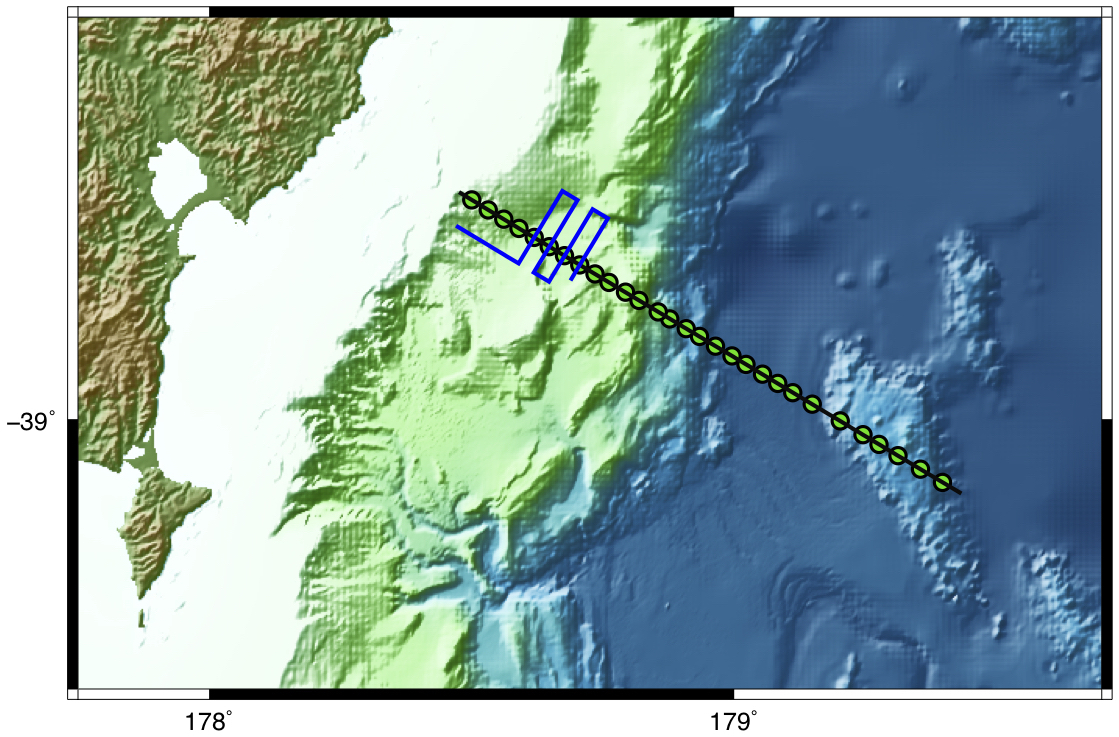 We’ve ironed out all the wrinkles from our first two SUESI tow lines, with extra starch, leading to a nearly perfectly executed performance on our northern profile (except for a few nail biting run-ins with extremely steep topography that left me in a panic; SUESI dropped down to just 25 meters above the seafloor at one point, which may seem like a lot, but it most certainly is not and scared me half to death). An added bonus, we are ahead of schedule. It doesn’t hurt that the seas have been flat with almost no wind over the last two days.

To make use of some of the extra science time we have accrued, we are collecting a handful of crossing profiles along a relatively flat portion of the fore-arc seafloor. After the prior close encounter, I was in no mood for any more drama. Plus, one of the crossing lines is very near to site U1519 from IODP drilling expeditions 372/375, which should complement those suite of data nicely.

We will be done towing in about eight hours, then begin OBEM recoveries for the second to last time. The most difficult aspects of the survey operations are now nearly completed, let’s hope things settle down a bit for the remainder of our voyage.

For your viewing pleasure, a photo of today’s sunset, and an even brighter night sky. In the words of one Kiwi fisherman, ‘cool bananas’! 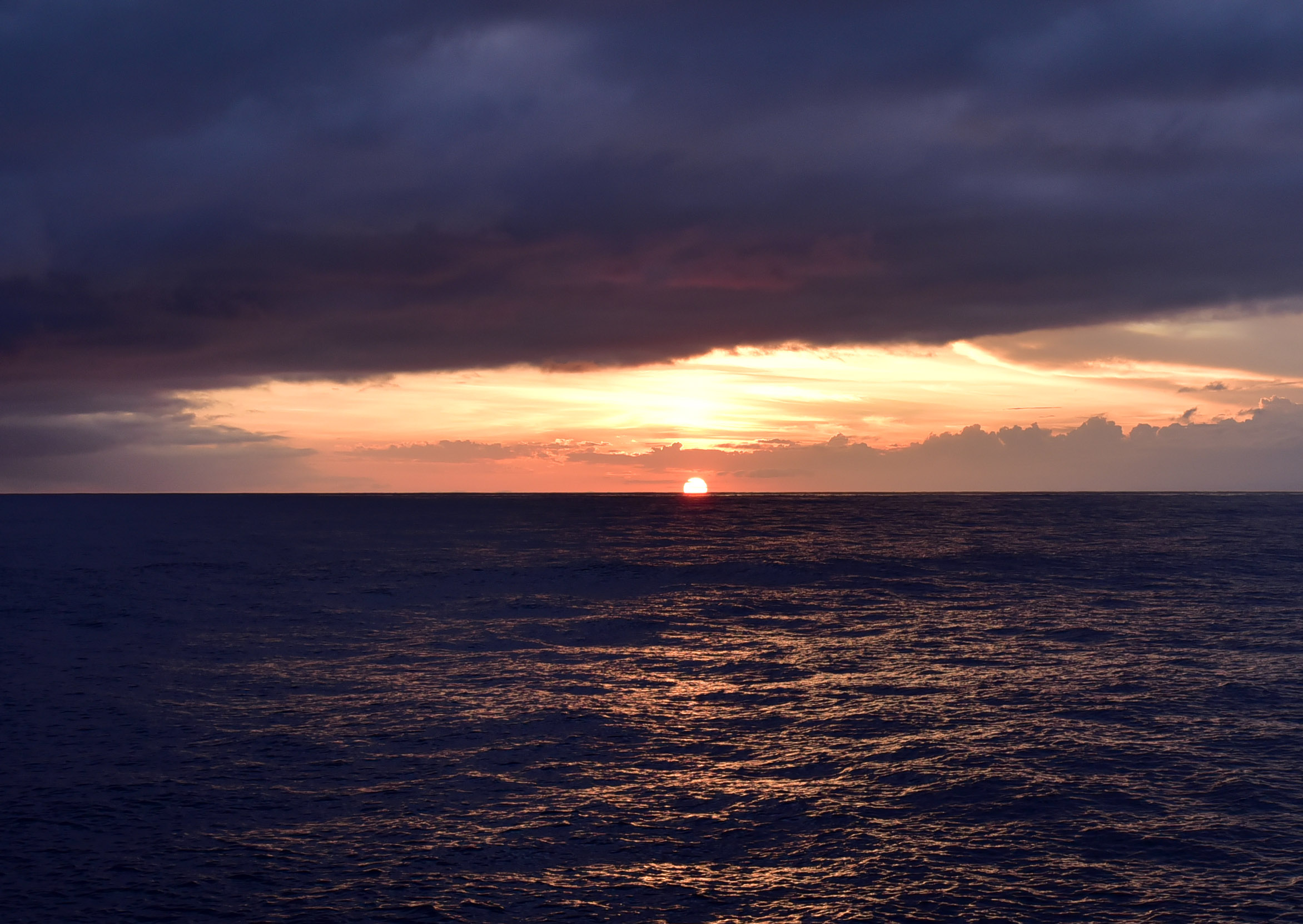 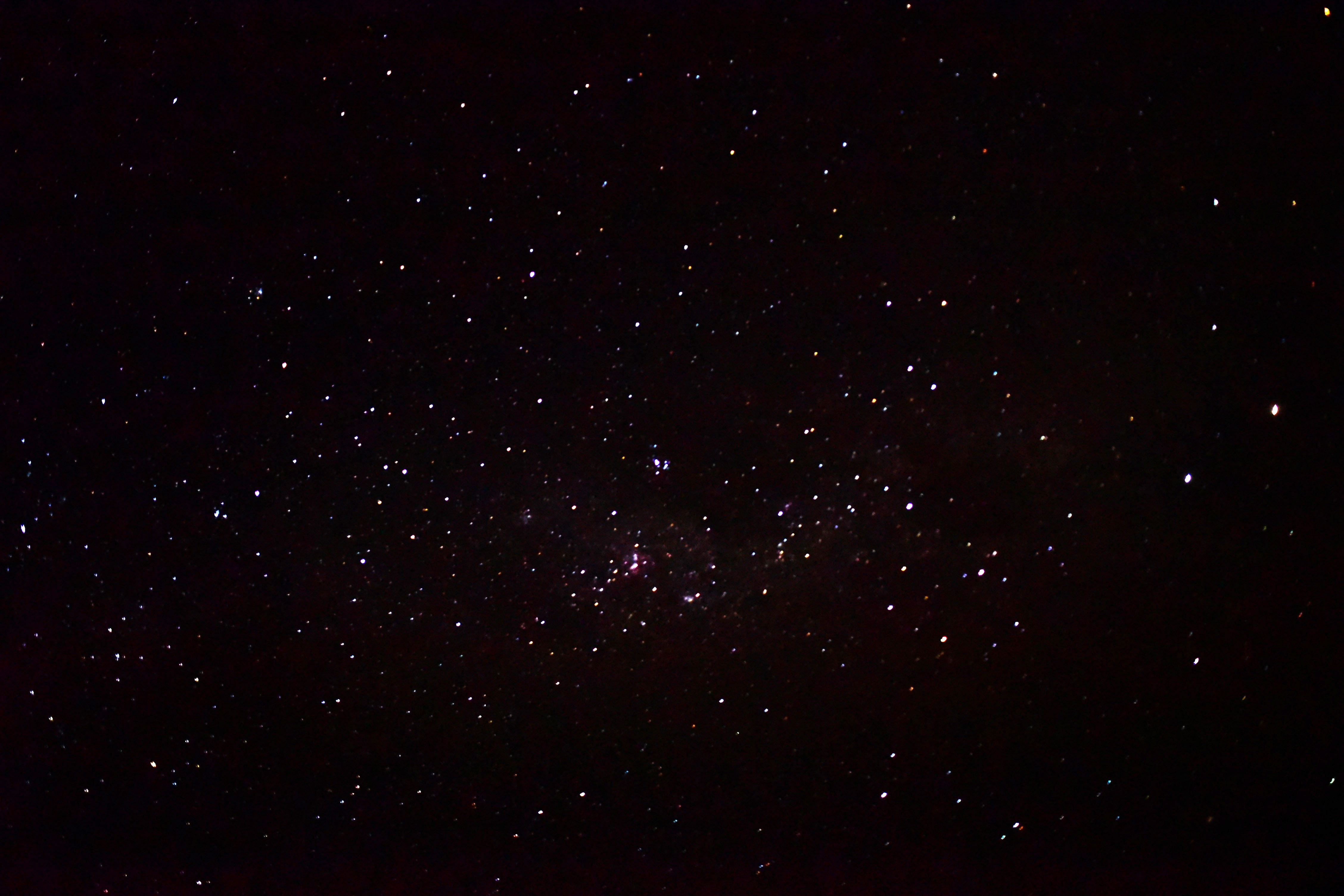 We completed receiver recoveries for the central profile, and have maintained our 100% recovery rate. We are currently working on the northern profile, and expect to begin SUESI ops in less than 24 hours time. Our science team is now a well oiled machine, cranking out receiver deployments every half hour. The saga continues.. 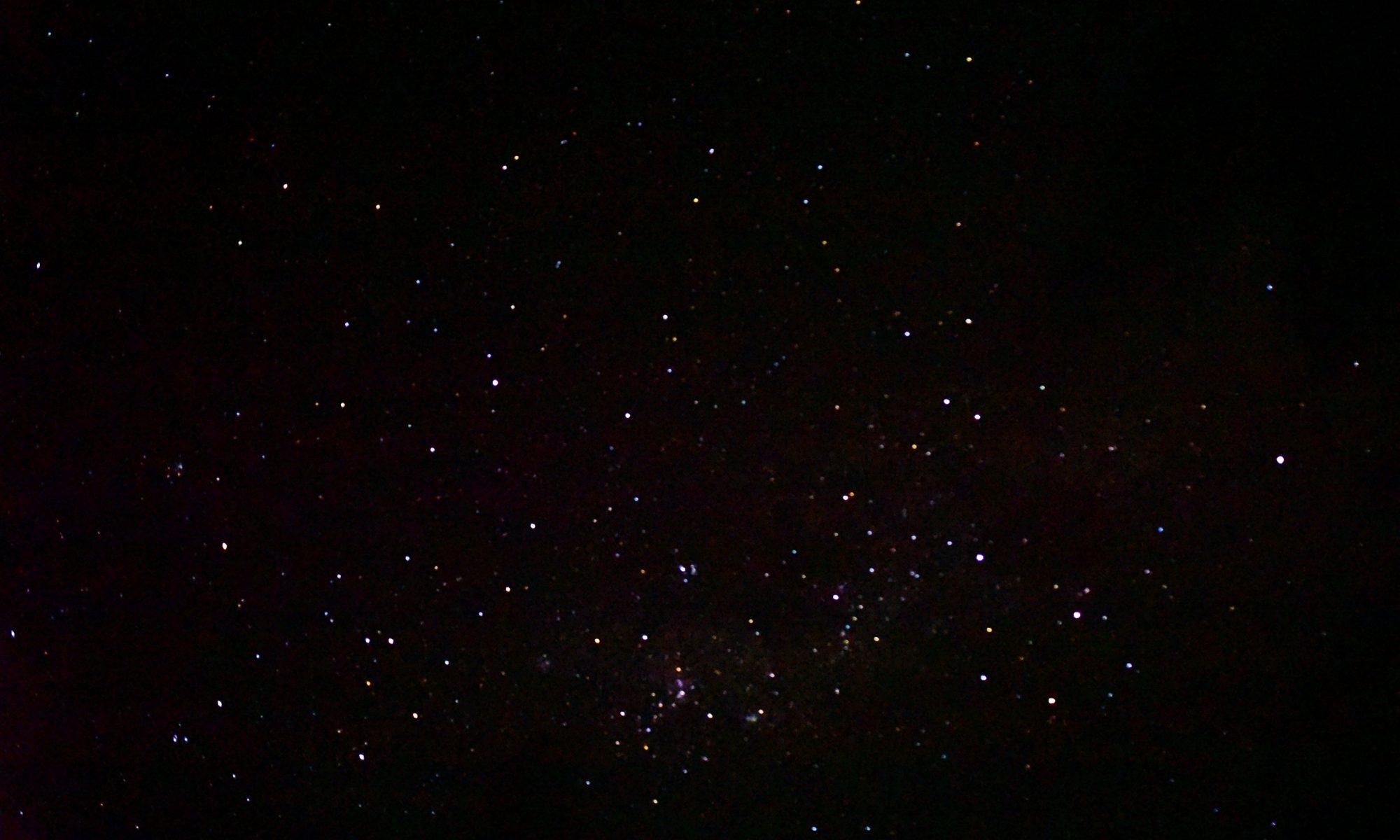 Prior to releasing our OBEM receivers from the seafloor for recovery, we must navigate their position to account for drift due to ocean currents. This is necessary for accurate modeling of the controlled-source electromagnetic data from the SUESI transmitted waveform. We navigate the receivers by pinging on them with a transducer mounted on the hull of the R/V Revelle. The receivers listen for 11.0 kHz and reply with a 12.0 kHz ping.

We drive the ship in a circular tow while logging the two-way travel time and the GPS position of the ship at the moment each ping is sent. After getting several data points for accurate navigation, we send a coded acoustic signal that tells the receiver to release itself from the seafloor.

On an unrelated note, the weather has improved dramatically over the last 24 hours and brought us calm seas and clear skies. After some effort, I managed to get a decent photo with little blur of the starry night sky. Not an easy feat on a constantly swaying ship. Enjoy! 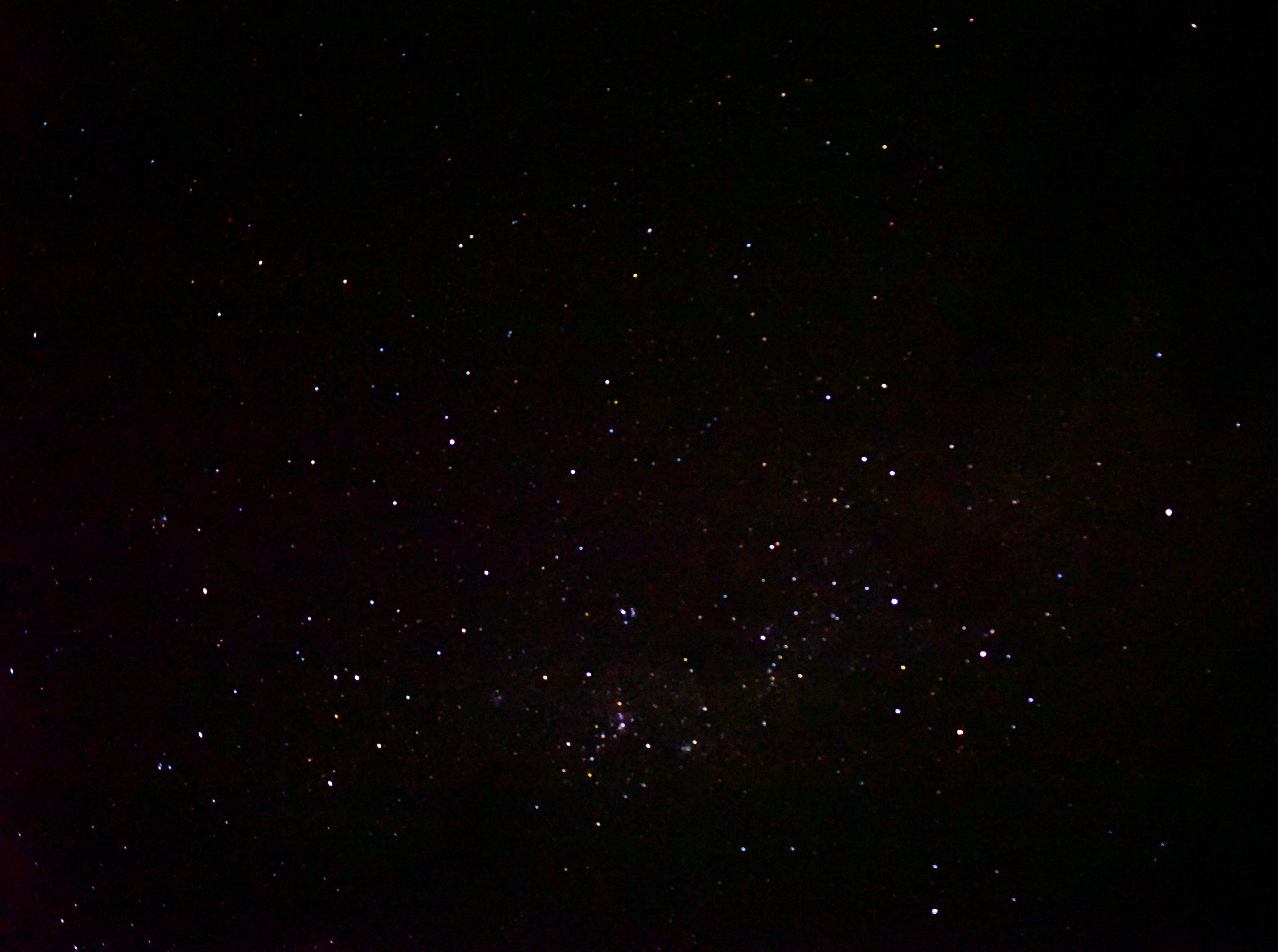 We completed most of the second line of SUESI deep-tow operations early morning yesterday and transitioned into OBEM receiver recoveries. Unfortunately, the seas were not kind to us near the end of the tow line, and we were forced to turn off course due to gale force winds and confusing sea surface current patterns. On the bright side, we only missed about 10 out of 145 kilometers of planned towing on the seaward end of the profile.

Below is a time lapse movie of our most recent SUESI deployment. As you can see, most of the work entails getting the 300 meter antenna and copper electrodes in the water.

Of the 15 OBEM receivers recovered thus far, the data look fabulous. Anxious to see how the data look on the remaining sites. We also decided to leave behind three OBEMs near the trench axis to collect long period magnetotelluric data, since we only need 30 receivers for the upcoming northern SUESI tow line.

We finished deploying all 42 OBEM receivers along the central profile and had SUESI in the water before lunch today, a comfortable 24 hours ahead of schedule. 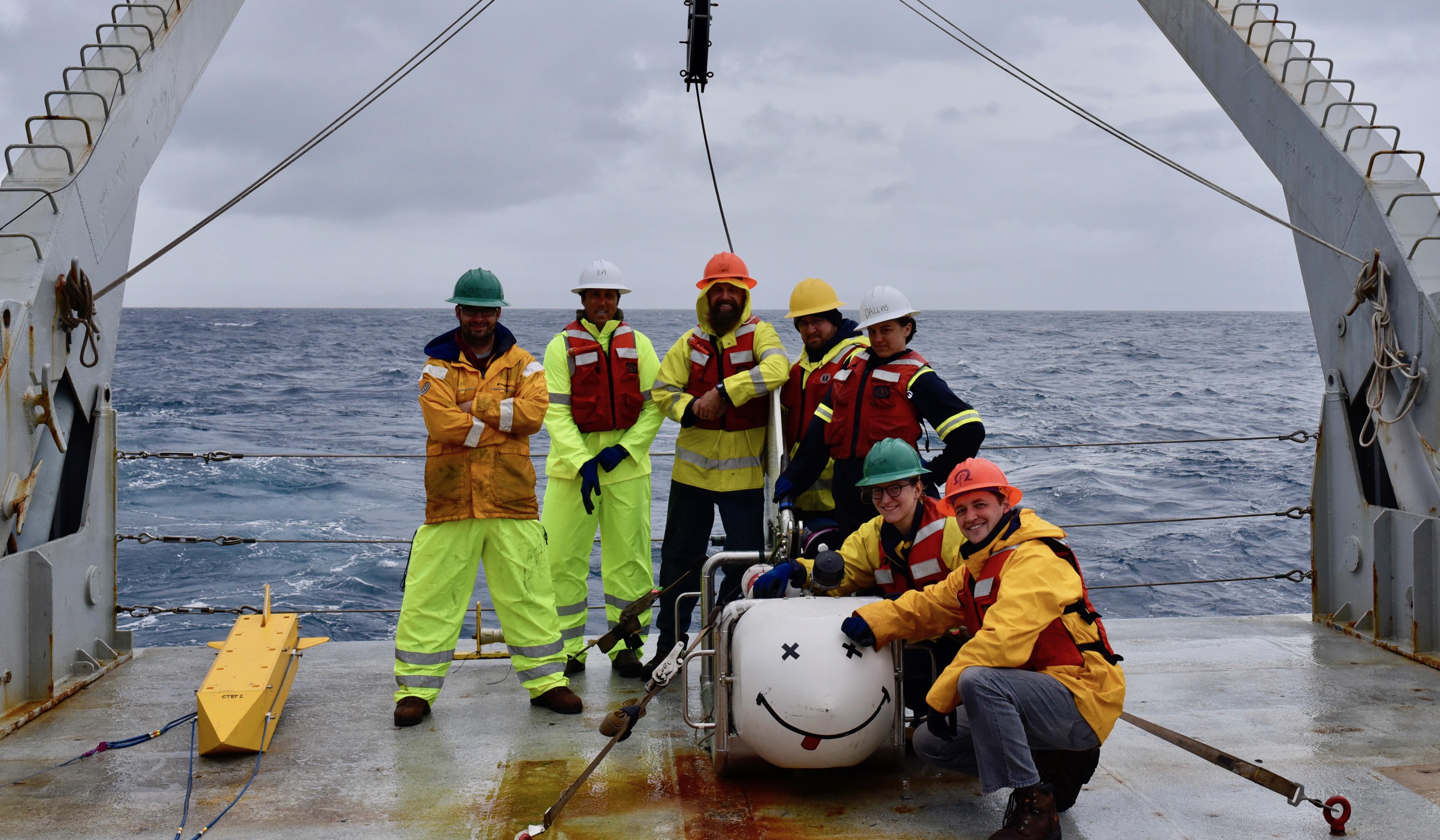 While the team was hard at work launching SUESI, I was reformatting a real-time navigation code (originally written by Kerry Key) for this survey. It is now finally working! In the screenshot below, the leading black square shows SUESI’s current position, the red circle is the ship’s position, and the triangles are the surface GPS transponders (named Barracudas) that reply to pings from SUESI’s onboard acoustic unit. The bathymetry is shown in the background color map, the black lines are 100 meter depth contour intervals. The two-way travel time between SUESI and the Barracudas as well as the GPS positions of the Barracudas are communicated via the tow cable to a control terminal on a computer onboard the ship. The navigation code reads this information in along with the GPS position of the ship to calculate SUESI’s current position in the water. These data streams are updated every 15 seconds. Besides being a valuable tool for anticipating rough topography in SUESI’s tow path, this information is also critical for modeling the data to high accuracy during post-processing. 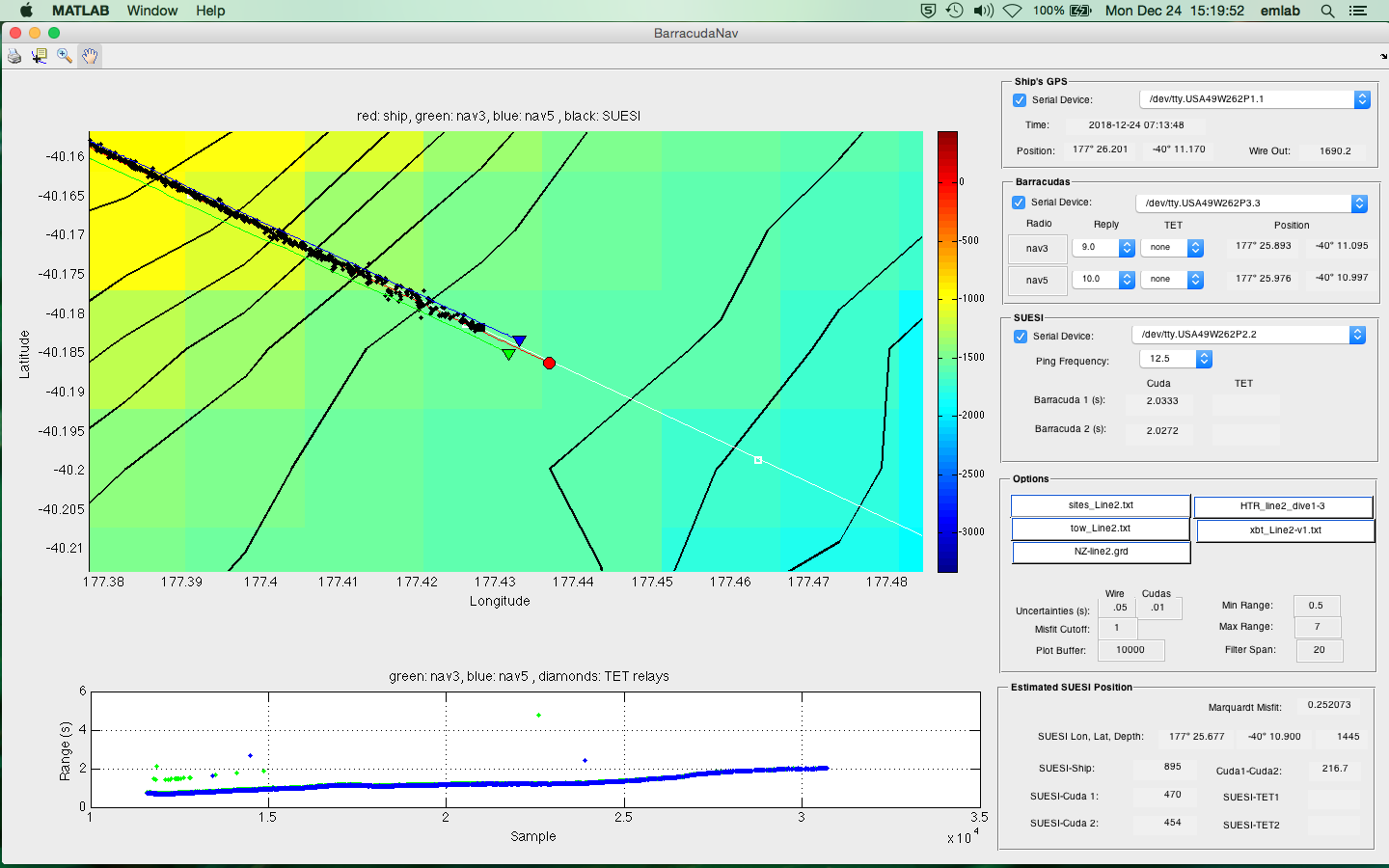 We successfully recovered all 38 OBEM instruments 24 hours ago, and the data look great. Below is a first glimpse at a spectrogram from the time series recorded by one of the receivers. Channels 1-2 and 3-4 show the magnetic and electric field data, respectively. 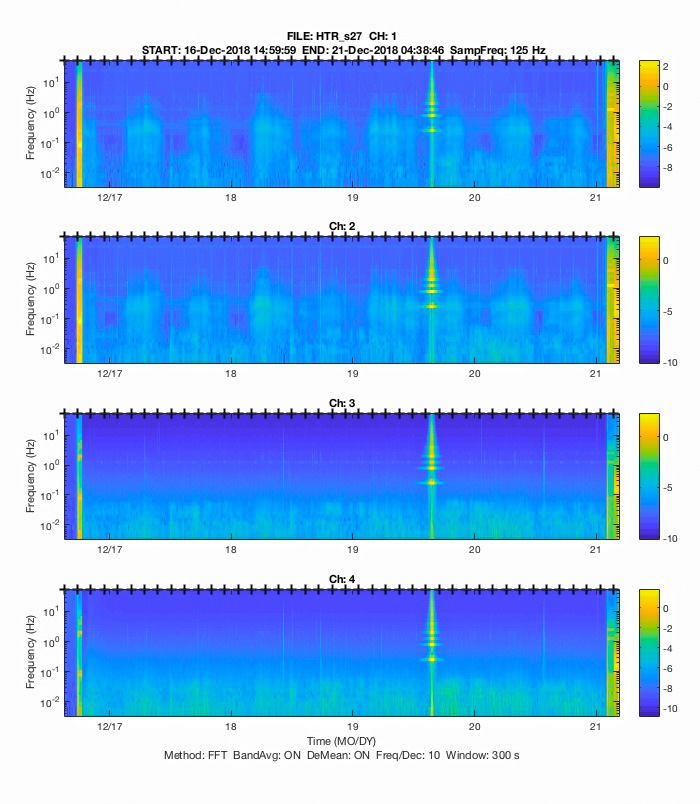 Notice the bright, Christmas tree-like feature on December 19. This is the signal from SUESI flying over the receiver. The horizontal stripes at 0.25 Hz, 0.75 Hz, etc are the fundamental and harmonic frequencies from our source waveform (we transmit a 0.25 Hz waveform).

Elsewhere, you can see a diurnal variation from blue to green at around 0.1 Hz. That signal is being generated by tidal currents, aka the motion of the ocean. After some more processing, we will be able to retrieve magnetotelluric data, a passive source method that relies on interactions between the sun and Earth’s magnetic field.

All in all, things are looking good. Indeed, we have now redeployed 35 of 42 OBEM receivers in a mere 16 hours. In 8 hours time, we will be putting SUESI in the water again to collect our second profile of controlled source data!! Best Christmas present EVER. Let’s just hope the weather plays nice.

We hauled in SUESI yesterday afternoon and began recovering OBEM receivers. We do this by sending a coded acoustic signal to a transducer installed adjacent to the data logger, which triggers a voltage across a small piece of cable known as a burn wire. The voltage corrodes the burn wire and allows the receiver to release from an anchor and float to the surface. The receiver is also equipped with a GPS transponder that lets us know when it is on the surface as well as its current position so we can retrieve it. 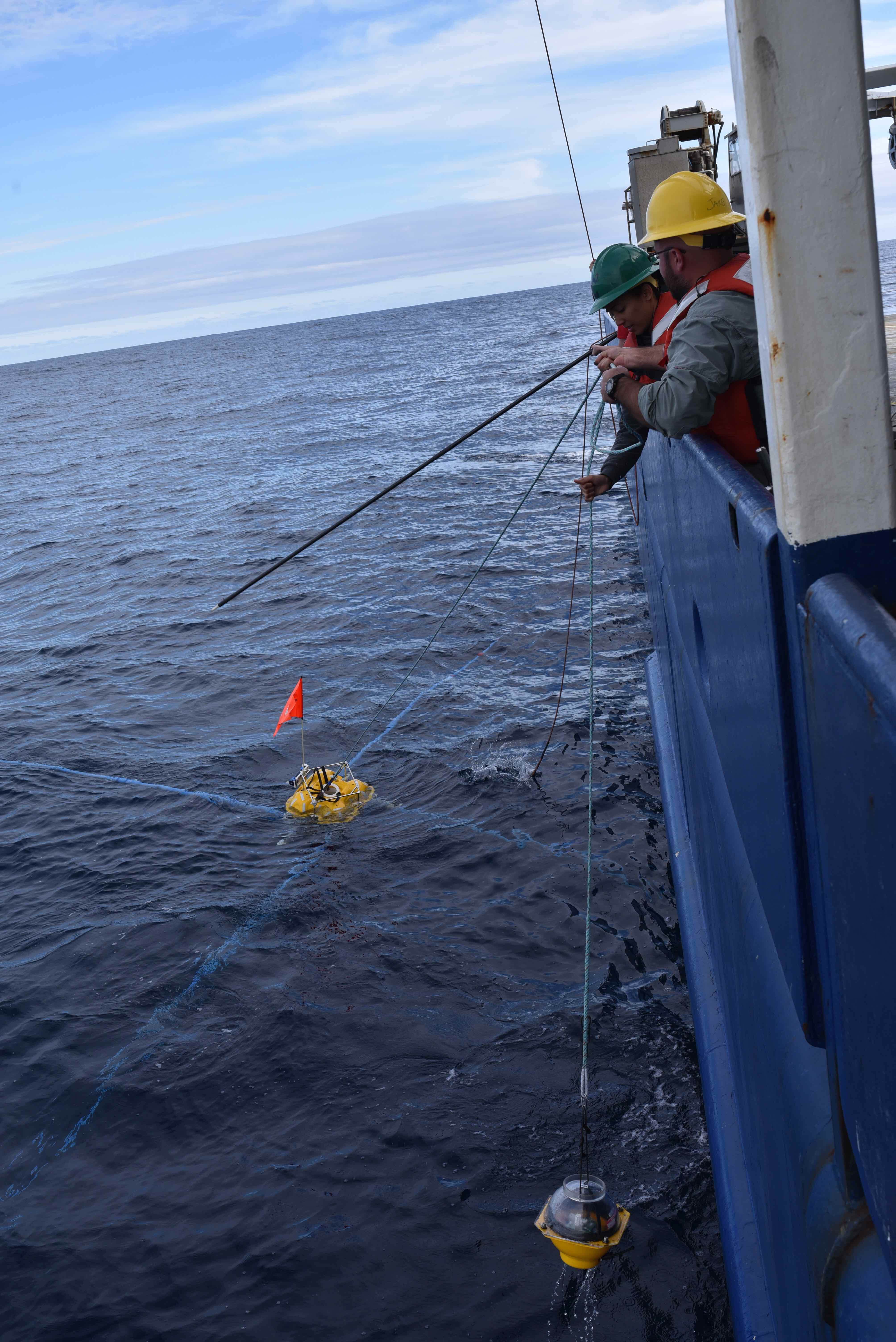 We should be done retrieving all of the receivers in the next 36 hours, after which we will transit to the central survey line and repeat the entire process once again!

Well, I thought yesterday was going to be the start of “boring is good” operations, but we hit a snag just as we started flying SUESI over the trench axis, where the bathymetry steepens considerably. The altimeter stopped functioning, which effectively means we were flying blind, and the last thing any of us wants to happen is to run SUESI into the seafloor.

After discussing our options with the Captain, we decided the best course of action was to haul SUESI back on deck to swap out the altimeter for a spare unit and use the repair time to turn the ship around to get full data coverage across the trench.

Once SUESI was secured on deck, we swapped out the altimeter, and used the remaining time during the transit to make some adjustments to the Barracudas, which are part of our inverted long-baseline navigation system (more on these in a future post). When we were in position to deploy SUESI again, we did a deck check, only to find that she was no longer willing to output any current. This is the first time in nearly ten years of operations that SUESI has experienced this malfunction.

After stressing about what the cause could be, we swapped to the backup SUESI and did another deck check. Everything was working fine, and we went ahead with redeployment. By just before midnight last night, we were deep-towing ~100 m above the seafloor once again, having only lost about 5 km of coverage near the toe of the trench axis.

It’s been an eventful voyage thus far, to say the least. Knocking on all the wood on board for smooth operations for the remainder of the survey.

We dove right in to transmitter ops at 2:30 am this morning. This is no trivial task, so it is no surprise that we had some hiccups during our first of four transmitter deep-tow lines.

The Scripps Undersea Electromagnetic Source Instrument (SUESI) is a horizontal electric dipole transmitter rated to 500 Amps of output current. We typically deep-tow SUESI about 100 meters above the seafloor at 1.5 knots (~2.8 km/h) to collect controlled-source electromagnetic data with our OBEM receivers.

There is always a learning curve during the first deployment, and this time around was no exception. It took us 3 hours to get SUESI in the water, and at first it seemed all was well.

After getting her to about 2000 meters water depth, it quickly became apparent that one of the copper electrode antennas had broken off. We were pushing 1500 Volts to SUESI, yet she only output 100 Amps of current, a clear sign of trouble.

So we pulled her back on to deck and confirmed our suspicions. The copper on the short antenna had snapped off.

We went ahead with replacing the copper tubing and made the necessary adjustments to ensure it would not happen again.

We faired well in the second deployment, and now SUESI is humming along, taking in 1700 Volts and outputting 300 Amps of current with a 305 meter long antenna, which provides us with powerful dipole source moment. She is now flying safely at an altitude of 100 meters.

After only two hours of sleep in the last 36 hours, it’s time for this chief scientist to get some much needed shuteye. Check back in tomorrow for some more background on marine electromagnetic methods and our science objectives during this voyage.